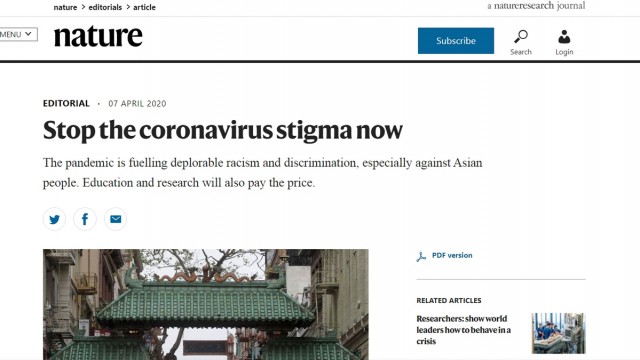 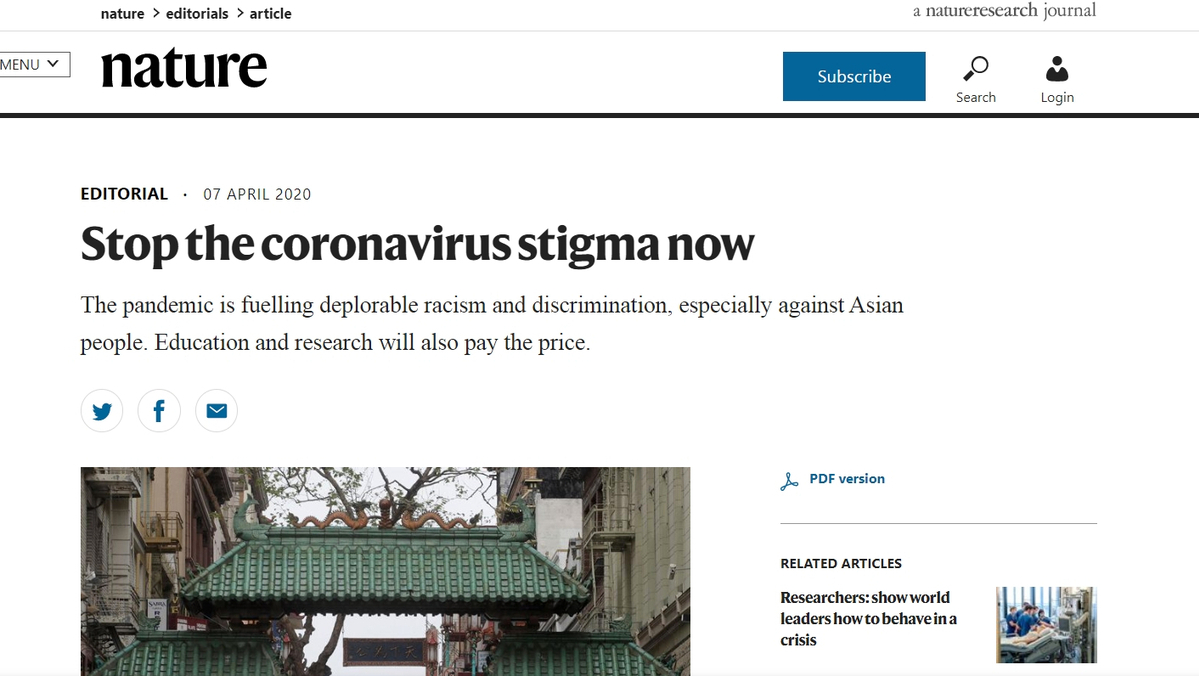 Nature, one of the world's top scientific journals, issued an editorial on Tuesday apologizing for associating the novel coronavirus with Wuhan and China in its news coverage.

It also appealed for people to stop the stigma around the disease because it fuels racism and discrimination against Asian people, which undermines their willingness to study and work in foreign universities, institutions, and other scholarly enterprises.

In February, the World Health Organization announced the disease caused by the novel coronavirus would be called COVID-19. "The WHO was implicitly sending a reminder to those who had erroneously been associating the virus with Wuhan and with China in their news coverage — including Nature," the editorial said.

"That we did so was an error on our part, for which we take responsibility and apologize," it said. But as countries struggle to control the spread of the virus, a minority of politicians are sticking with the outdated script and insist that China bears responsibility, it said.

These officials include US President Donald Trump, Brazilian lawmaker Eduardo Bolsonaro — the son of President Jair Bolsonaro — as well as politicians from the United Kingdom, Iran, India and Australia.

"Continuing to associate a virus and the disease it causes with a specific place is irresponsible and needs to stop," the editorial said, adding failure to do so has resulted in people of Asian descent around the world being subjected to racist attacks.

These attacks can hurt the feelings of over 700,000 Chinese students studying at universities outside of China, and many may feel hesitant to return in part due to fears of continuing racism, along with future uncertainties over courses and travel restrictions.

"These young people will experience disruption and the loss of new connections and opportunities," it said. "But the loss of students from China and other countries in Asia has wide-ranging and worrying implications for scholarly enterprise, too. It means that universities in the affected countries will become less diverse — something that has not happened for generations."

"For decades, campuses have striven to boost diversity, and countries have enacted policies to encourage international academic mobility. Diversity is valuable for its own sake," it said.

"It encourages understanding and dialogue between cultures, and sharing of points of view and ways of being. And it has always been fuel for research and innovation."

The journal's advice for world leaders is to avoid and reduce the stigma, refrain from associating COVID-19 with particular groups of people or places, and emphasize that viruses do not discriminate and everyone is at risk.

"It would be tragic if stigma, fueled by the coronavirus, led Asia's young people to retreat from international campuses, curtailing their own education, reducing their own and others' opportunities and leaving research worse off — just when the world is relying on it to find a way out.